Since some of you may not live in Illinois (God love you), I must preface this story with an explanation of a Fact of Life one must deal with when calling the lonesome prairie home.  From about December 1st, to May 31st your car is more than just transportation.  It is a life-boat.  Once the snow starts, you basically give up on trying to keep your car neat and tidy and you are just happy that the damn thing runs when you need it to.  Each day you get in the car and valiantly try to knock off whatever snow  clings to your shoes,  but by the time you have to dig your car out of 2 feet of snow, you’ve really stopped caring and tend to collapse into the driver’s seat with the heat controls set as high as possible and the roaring vents blowing air just below the temperature of the sun on your feet and hands. All winter, the carpet on the driver’s side alternates between being covered by a puddle of dirty, cold water and a solid block of ice.  Also, the pedals and the floor become encrusted with sharp shards of salt and sand.  Therefore, barefoot driving becomes an uncomfortable affair regardless of temperature.  It is to this circumstance that the subject of the following tale owes his life.

On the night in question, I headed off to the local Dairy Queen for my nightly large M&M Blizzard. (You may live in Illinois if: You wear a winter coat and gloves to eat ice cream) I usually drive my pickup, but tonight I had on my flip-flops and didn’t want to have to work the clutch with bare feet, (You may live in Illinois if: you wear a parka and flip flops at the same time) so I took the family van.   As I was pulling out of the driveway, I saw something suspicious under my truck in the glare of the headlights. It looked like one of those kraft paper bags used for lawn waste that had blown under the truck.  (You may live in Illinois if: there are still lawn waste bags blowing around the neighborhood in mid-February). Whatever it was, it didn’t belong there.  In the finest tradition of the Hardy Boys, I got out to investigate.  I got down on my knees… in the dark…with the headlights shining on the offending object…and literally could not believe my eyes.  There was a young man, about 20-something,  laying under my pickup.  Time slowed down.  I had this Gollum-like conversation with myself:  “There is someone laying under your truck”, I said.  “That’s impossible!” I answered.  “But there he is, nonetheless!” I cleverly retorted.  “How did he get there?” I asked.  “I don’t remember hitting anything.” I chimed in.  “What’s should we do’s about it, precioussss?” I asked. (I was really losing it)  Finally one of the voices told me to “get that guy out from under there”. I opened my mouth to begin issuing stern commands, but all that came out was a high-pitched, squeaky “hey!” 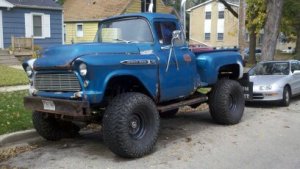 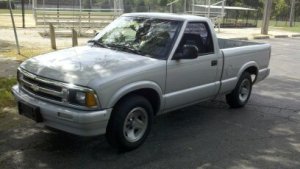 What I actually drive

But the spell was broken and I was soon indignantly demanding an explanation.  He claimed he was hiding from “some guys” that were after him.  He asked for help getting out from under the truck.  I told him that he got there alone, he could get out, too.  I informed him of my intent to call the cops.  He didn’t seem to be too keen on THAT idea.  My brain had finally processed what the hell was going on and I realized he was actually an idiot.  No one hides from “some guys” under a Chevy S-10.

I called 9-1-1 and had TWO squad cars in front of my house in less than 30 seconds.  The “guys” he was hiding from must have been the police.  Still, by the time they got there, the interloper had trotted off.  As he was departing, I asked the only thing I could think of: “Hey, what’s your name?”

He may have been an idiot, but he was a lucky one.  If I had put on shoes before stumbling out into the night, I would have taken the pickup truck and gotten lots of blood all over our freshly re-paved street.

One actual Jeff Foxworthy joke: You may live in Illinois if: You think 0 degrees is “a bit chilly”.